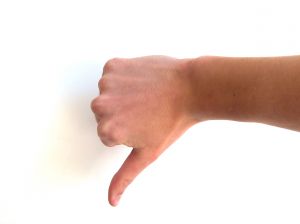 Every time I think nothing can surprise me, I am mistaken. I have two more examples of Lousy Customer Service. How places that don’t know it’s the customer who keeps them in business is beyond me.

Situation #1: My daughter wanted to join the Direct Sales ranks. She’s grown up watching her mother build a successful direct selling organization so it’d be a nice way for a college student to earn some money while working around class schedules.   We went on a research quest together to find a good company that was something she could be comfortable representing – both in product line and with a solid management behind it.

The Reader’s Digest version is that after three separate messages left for the corporate office using three different platforms (so “didn’t get it” wasn’t an option) it was only nine (9) days later did she finally get a return call. NINE DAYS! She basically said she wanted to sign up and just had a few questions first. We also attempted to contact a number of independent consultants to potentially find a sponsor. Only one person responded and she wasn’t too bad, but also quite new herself. There didn’t appear to be any other business builders; at least none visible.

When my daughter responded back that she had contacted her nine days ago and never heard back, so she joined another company, the company owner responded that she had sent a generic form letter about an informational call only four days after her initial request. Okay, um, four days later to say, “get on the call” (info that was already public) and still thinking that qualified as a response to the specific questions? Oh my. Enough about that one; it’s no wonder that company is still creeping at a snail’s pace after a number of years in business. Clearly, Blondie was not meant to enroll with that company and the lousy customer service helped save her from what was likely a horrific business experience.   All is good, though. She found a great company to join and both will surely thrive.

Situation #2: I took my girls to the botanical gardens yesterday. We love it there, it’s beautiful, great place, nothing negative to say – until our visit yesterday. They have memorial bricks on the grounds. They were sold as a fundraiser. We were told by a family friend who works there, but wasn’t working yesterday, where to find my mom’s memorial brick that she and her girlfriends had purchased in my mom’s honor. Then told us that if we had trouble locating it to find the black book at the front desk which had a map of locations for specific bricks so we’d know exactly where it was.

We went outside to the perennial section where the bricks were and couldn’t locate it. Most had faded so much they were virtually unreadable.   I went back inside to find The Black Book. I asked a total of seven people about said book and each time received responses of “There isn’t a book. I don’t know. You’ll have to come back another day.”   This isn’t a free admission exhibit, I wasn’t about to drop another $30 and drive another 50 miles round trip just to come back another day. Seven people had no idea about this book. I even read them the email I had received stating exactly where it was – which desk, which cabinet, and still received the pat answer of “I don’t know. Nope, can’t help you.”

The owner of these grounds has passed away and I know with 100% certainty that the lousy customer service I received today is absolutely not what he represents. While he was on this earth he would bend over backwards to ensure his customers had a great experience.  In defense of the volunteers, most of them, most, were very friendly, just not helpful. It appears there is a gap in the communication or training processes.   In the end we did go back out and hunt down the brick, but at no help from the facility.

What about your business?   Are there areas you can improve upon?   Sure, we can all do better and hope that we are all striving for continuous improvement.   But do you have any cavernous gaps that would land you on the Lousy Customer Service list?   Both of these examples above seem to have stemmed from communication problems and not remembering who their customers are.

In the first situation, she could have potentially lost out on a great deal of income for her company. While my daughter may be new as a direct sales consultant, her mother (who would be her coach and mentor in her business) has been in direct sales 25 years and has a proven track record as a successful business builder.

In the second example, they’ll never know the cost of business lost. This is a beautiful facility that welcomes hundreds of visitors each day, many from around the country when they are here visiting our beautiful city. They won’t get a second chance to make a first impression.

Time to take a good look at your own business to make sure you don’t end up on the Lousy List.