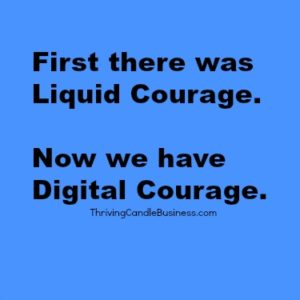 It used to be if someone had a few cocktails and started mouthing off, it was called Liquid Courage. While that is still true, now we’ve entered the age of Digital Courage.

People can be real a-holes online.

I am saddened, disgusted, frustrated, disheartened and a slew of other adjectives at how lippy, sassy, snarky, rude, and disrespectful some have become on social media.

I know I sound like I’m one hundred years old talking about young whippersnappers of today and back in my day that would never be allowed.  But age has nothing to do with it. Rude is rude.

To be clear, I’m not referring to comments being misinterpreted online. I understand that can happen and we can be guilty of adding our own tone to messages. I’m talking about blatant, no possibility of misunderstanding, over the top unacceptable comments. I’m sure you know exactly the type I’m referring to.

Hiding behind a screen has created moral lapses.

People are taking risks and saying things online that I highly doubt they would if they were facing the person to whom their darts were targeted.

Fortunately, or unfortunately, depending on whether you’re the sender or receiver of said digital courage, this poor behavior reflects on the person delivering the barbs. They have some issues they need to work through, but until they are ready to do that, it’s easier to spew venom outward.

What you can do about it?

Do nothing. Sometimes the best response is no response. You don’t need to attend every argument you’re invited to. Let their childish behavior just hang out there. The others reading it can see they’re being a bully. You don’t need to defend your honor. Consider the source.

When I’m the target of an attack, I could certainly shut them down with a few poignant words. However, I won’t go down to their level. They’ve already proven they’re closed minded and not open to anything I have to say.