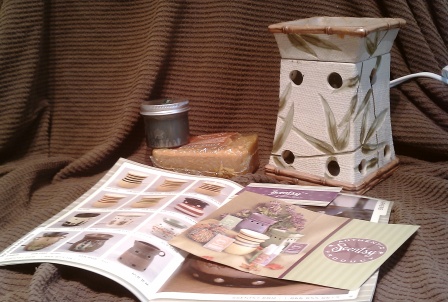 Scentsy Wickless candles currently has over 100,000 consultants. When I started with the company, back in the olden days of 2006, there were only 500 consultants company wide. That’s such a wild concept considering my own personal group is larger now than the entire company was when I started my Scentsy journey.

As I sit here in my rocking chair, quilt on lap, reminiscing about what it was like to walk a mile to school, uphill, barefoot in the snow, I’ll share what it was like when I was a brand new Scentsy consultant.

I received a Java candle warmer as shown in the above photo, lower right image on left page of the catalog.   It was brown and shaped like a small coffee pot.   It’s now retired. The candle bar I received was Rum Cake.   It’s similar to our current Sugar Cookie, only about ten times stronger.   It’s now retired.   The room spray was Flower Shop.   The container was metal, not like the now plastic canister. It was very strong smelling; obviously floral and heavily rose scented. Not my favorite. It is now retired.

The party testers had metal caps on them (shown in above picture). There were no basket testers or mini testers. There was no New Consultant Start-Up Guide, no eBooks, I don’t think there was even much of a Policies and Procedures Guide.   When I asked if I could have an external website, they weren’t sure how to answer that as no one had one previously. The catalog was 12 pages, approximately 8″ x 8″ in size, warmers were priced at $14.95. I think bars were $2.95 each.

We didn’t have midsize warmers or plug-in warmers; there were no Travel Tins. There was a brick included in the optional Consultant Scent of the Month kit, but it was wrapped in cellophane (I found an old chunk in the back of a drawer and is also shown in the above photo).  Bricks were not available for customers to purchase. Some of my favorite scents that are no longer around include Tuscan Garden, Rum Cake, Black Pepper and Clove, Pomegranate Orange Zest and Fresh Brewed Coffee. Hanging Fresheners were called Car Candles and they were not available in all scents.

To give you an idea how small of a little group we were back in the olden days, if you wanted to do a vendor event, we just called Scentsy and told them how much inventory we wanted to “borrow” and they’d ship it out.   Then after the event, we could pay for what we used and then send back the rest if it didn’t sell.

The first regional event where I gave a presentation as a Director was called a “Blitz” (next known as World Tour, now called Spring Sprint). There was a spectacular turn out of almost 30 consultants and potential recruits.   It was the Midwest Blitz held in South Bend, IN.

The corporate consultant websites that we now have is the third one since I started. We’ve upgraded and migrated a few times.  There was no web policy at the time.   Initially I was told I could have an additional, external website because at the time our corporate replicated websites left much to be desired.   They were bare bones and served a purpose, but didn’t contain a great deal of information.

I built an extensive external website but once complete, I was then told that we could not use the word Scentsy or any of the images or product names.   So then I needed to rework the entire site to remove all references to the company, no secret keywords, no meta tags, nothing that had reference to Scentsy wickless candles. It was a generic “wickless candle” website and somewhat covert; no different really than those you see now for companies like Melaleuca that can only advertise as “wellness company”.

Then lo and behold, as with any young company going through growing pains, someone else came along and decided that we once again could have websites that used the word Scentsy, and could have product images and could once again be overt about it. If you want to survive working with a new or young company, you really need to be flexible and learn to adapt … a lot!

Everybody Knows Your Name

The theme song to the 1980’s television sitcom was “Where Everybody Knows Your Name.” This is what it was like at Scentsy back in the good old days.   There were a handful of staff members, many of whom have since moved on to other ventures. Some of the original ones are still there, but it was very easy to get any one of them personally on the phone at any time, including Orville.

I could call up and say “This is Laurie Ayers” and would always get a friendly response like “Hi Laurie, how’s it going?”   Laurie Willis was the Customer Service department (yes I think she was the entire department then) so I didn’t want them to get confused, otherwise I could have omitted my last name and they’d still know who I was.

Bring Back My Bar

Next week, starting July 1, 2010 and running for the entire month of July, Scentsy is running a limited time only Bring Back My Bar Promotion.   Twenty scents that have been retired will be brought back so that you too can experience a whiff of Scentsy in the good old days.

Still Plenty of Room for More

Just because 100,000 people have decided to jump on the Scentsy wagon, there are currently approximately only 70,000 active consultants total – this includes all 50 states, Puerto Rico, Canada and Guam.   US Population in 2010 is 308 Million and growing.   Add another 33 plus Million people in Canada. You can clearly see that current Scentsy consultants only make up a tiny grain of sand in the vast sea of potential candle lovers so just let me know if you’d like information about starting your own candle business.

I didn’t plan on starting a candle business.   I went to college for business administration and homeland security. Life takes some unexpected turns sometimes. I’m thrilled that I have been a part of Scentsy since the olden days and that I have made a contribution to the Scentsy of today and also of tomorrow.

About the Author: Laurie Ayers is a Michigan work from home mom and a Superstar Director with Scentsy Wickless Candles. She enjoys helping men and women start and maintain a home based business in the US, Canada, Poland, Mexico, Australia, Puerto Rico, Germany, Ireland and the UK. To download a FREE Start Up Guide which provides more details about how to start a home business as well as to learn about our compensation plan go to www.thrivingcandlebusiness.com/how-to-start-a-candle-business/ or for updates on Facebook LIKE www.facebook.com/ThrivingCandleBusiness and twitter @directsalesblog