Every day on social media I see Scentsy consultants who are self-sabotaging their business. I don’t know if they’re afraid to succeed or if they genuinely don’t want to succeed.

For the purpose of this post, I am referring success in the sense of Scentsy consultants who say they want to build a business, to lead a team and reach top ranks.

These are also the same consultants who are struggling in their business but say they are trying. They say they’ve done everything they can and yet it’s still not coming together for them. I disagree. Remember there is no try, you either do it or you don’t. If they truly did everything they wouldn’t be struggling.

Wouldn’t it be nice if it were as easy as going to the store to get more team members?  I’m not suggesting it is easy; but it is simple. With laser focus on sponsoring activities and monthly recruiting goals, one person can build and rebuild the team, regardless of inaction the rest of the existing team may be doing. 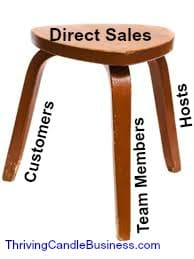 Direct Sales is like a three-legged stool, comprised of customers, team members and hosts. Lack of attention to any one of those legs will give the consultant a very wobbly seat which will eventually tip over.

Every single action that Scentsy consultants take should enhance the relationship with customers, hosts and team members, both in getting more of all three legs and keeping the existing ones productive.

Ask: “Is [this] activity going to get me new customers and sales, new hosts and rebookings, or new team members and help current ones soar?” If the answer is NO, then don’t do it.

Yet daily I see Scentsy consultants who say they want to succeed, but spend a large chunk of their day on social media – doing activities that will not result in new customers, hosts or team members. Instead they are spending a majority of their time talking to or “helping” existing Scentsy consultants, and not even consultants in their own downlines!

So now what we have is not one, but a group of Scentsy consultants who say they want to be successful, and get new customers, hosts and team members, but instead are hanging out with each other, under the guise of helping each other.

Don’t Want to or Afraid of Success?

In this scenario where the walk doesn’t match the talk, one of two things is happening. Either they don’t really want to build a business, lead a team and earn a spot in the top ranked or there is some fear of success.

If they don’t really want to be successful with Scentsy and would just rather hang out with like-minded people, that’s fine. Some people do join Scentsy for the companionship. It’s a great reason if that is their “why.” But then to say they’re doing everything they can to build or rebuild a team isn’t quite accurate, is it? It really is okay if they’re not vested to reach the top, just be honest about it.

If there is some fear of success, then I really hope they work through that. You need courage. To get courage you need to push yourself one step at a time through the fear.  They will make mistakes. They will have some bad days, weeks or months. They will get frustrated. They will tell people the wrong thing. No one reaches the top of the mountain without a lot of bruises, scrapes and a few breaks along the way.  So what? Apologize if necessary, make it right, and keep moving forward.

If this describes you: STOP SABOTAGING YOUR BUSINESS by hanging out with existing consultants instead of separating yourself from them so that you can be around new customers, hosts and team members. Scentsy consultants make excellent friends, but tell your friends you’re busy working now, and you’ll catch up with them after your work day is done.