Two of your favorites: Scentsy and Saving Money can be combined into one great experience. As long as you’re already stocking up on your favorite fragrant scented candles, soaps, lotions, laundry products and air fresheners you might as well order more than one to get a discount.

Why do you think warehouse clubs like Costco and Sam’s Club are so popular? You can purchase in bulk for much less than you can buying individual packages at your neighborhood grocery store. You don’t even need an oversized shopping cart, nor do you have to box up your own purchases with Scentsy. The friendly UPS driver will deliver it right to your door.

The following information was recently shared by the CEO of a Direct Sales Candle Company. It is relevant information to any candle company.   It was in response to a discussion about how it appears some people enjoy candle scents when they are first warmed or burned but then it seems like the scent goes away quickly. Actually that may not be the case. Read the explanation below – I found it fascinating, and hope you do too.

Fragrance is a molecule that is released in the air. When there is a fragrance molecule in the air, it hits receptors in the nose. Everyone has thousands in their nose. If the scent hits your receptors in certain patterns/formulas – our brains interpret them in a certain way. (Ex. if receptors x y z all hit at the same time – your brain would register that as “skunk” or “roses”, etc). 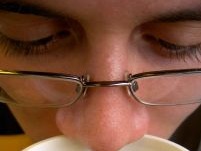 Everyone has different set of receptors – some smell more acutely than others. When people are exposed to fragrances – the same over and over again, generally because we like to melt our favorites – the receptors can get overloaded. Your body can get immune to it – become anosmic to fragrance. (Similar to drug addicts needing more and more).

Candle companies don’t have to make any changes to their in-house formulas.   It’s something that happens with the ‘sniffer’ not the wax.   It’s the same thing as when people sometimes go away on vacation, but then come back home and really smell it the same wax that they previously complained wasn’t scented as strongly. Same as smokers who tend to lose their sense of smell but then quit smoking and suddenly smell more. END_OF_DOCUMENT_TOKEN_TO_BE_REPLACED

In answer to the frequently asked question, “What Kind of Wax does Scentsy use?” the following was provided by Scentsy CEO, Orville Thompson. It first appeared in February 2006.

Many customers have asked about the wax we use and why. Here is the scoop. We use a food-grade petroleum [proprietary paraffin blend] based wax. We chose this wax because of its superior scent loading ability, melt point and firmness. We looked into vegetable based waxes, and we just couldn’t get a quality candle bar.

The issue of vegetable vs. petroleum [paraffin] waxes is raised primarily by vegetable wax candle makers because of the health risks associated with burning petroleum waxes. Most of the scientific research I have read (as opposed to sales literature) suggests that there are plenty of health issues with burning candles of any type of wax. Switching to vegetable based waxes does not seem to reduce the health risks as much as the veggie wax people would like us to believe. The Scentsy solution is simply not to burn the wax. The wax is not burned, and therefore, not released into the air to pollute our lungs, walls and furniture.

The issue of the type of wax we use is a non-issue, with regard to the chemicals released while burning, because we only warm the scent out of the wax – the wax remains in the warmer. If customers have a question about what kind of wax we use, I always ask them why they ask. This is because any answer other than “˜soy’ or “˜vegetable’ will put off anyone who is predisposed to using to using only vegetable wax, even if the logic explained later is sound. If they respond by saying they only use vegetable wax candles, or are asking out of simple curiosity, you can explain the Scentsy solution and how it is better than burning any kind of wax which put our products in the proper and positive light.

To put it simply, I would rather have petroleum wax in a warmer than a soy wax dispersed into the air of my home. Let wicked candle makers fight over relative safety. With Scentsy we practice “safer scents” – we abstain from wicks.