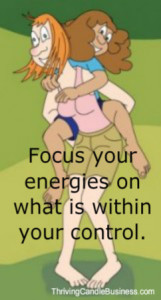 It’s not uncommon to hear direct sales consultants complain about how irritating it is that they are doing all the work and their upline is just getting a free ride.

Generally this isn’t the case; it only appears so because some downline members don’t see the big picture. That said, there are indeed some instances when an upline should be providing more training to downline members. In most direct selling companies there is a systematic approach to take care of these situations. I’m not talking about that genuine lack of responsibility

I am referring to the self motivated, go-getter type consultant who has the inner drive and objective to build a successful business, yet they chose to sign up with someone who does not share the same level of career aspirations at this time. Below is a perfect example of what I’m talking about. After reading it perhaps you’ll have a different perspective.

Disgruntled Consultant: It’s just frustrating because she does it more for personal use and also has her best friend under her as well.   Heck I even asked her if could join. But now I’m over here working my hiney off and in return she gets a free ride and promotes. Isn’t that nice for her and she has never sent me anything in return.

Upline Response: Well, as far as your sponsor is concerned, a few things to keep in mind, she is certainly welcomed to be a part time seller, casual user. The company doesn’t require her to be a business builder. And it sounds as though she did not actively recruit you, because you stated, “˜you asked to join.’  I sometimes I hear third hand how some are upset because they think they do all the work and I get paid off of it. Actually that is partially true – because that’s how our compensation is set up. It’s just a fact with a two-tiered compensation plan.

However it is mostly an inaccurate statement because I had to do the work to get to this point and I also need to continually do the work to get paid on everyone. The same goes for your sponsor. Your leg’s numbers may be pushing her to advance right now, but that’s simply how it works out sometimes. That’s why direct sales is a bit of a numbers game. (Note: I am not suggesting people are just numbers – rather making a reference to how volumes sometimes work out).  Sometimes you get gems in your downline who go like gangbusters (like your sponsor and my sponsor received when we joined their team) and other times you get very part time casual users.

The part time, casual users make up a majority of consultants in any direct selling company. Of all those who join, only a small percentage stick with it long enough to earn senior ranks and manage large organizations. The fact that her personal goal right now is not to build a successful business should not be an area that frustrates you – rather it’s just a fact of direct sales life. Some will; some won’t; so what.

Further, she may be getting pushed to a certain degree right now, but as long as you and your sponsor are the same title, she doesn’t get paid off you or your group, so it’s really no benefit to her. In theory if she’s not doing her minimum you could make Manager before she could. You’ll always be her frontline, so you don’t actually pass her, but you could promote before she does. Or if she happens to get advanced to Manager with your sales volume, then once you break away, she won’t be able to maintain it without some serious rebuilding of a new leg, so again she won’t be getting paid.

Lastly, as far as what your hopes are as far as her direct involvement with you, you also have additional upline support and a great group of fellow team members who are more than willing to help with whatever you need.   So do you truly feel you are lacking in something you need for your business because she has opted not to build a strong organization herself? Or is it more just something that bugs you?

Don’t let what she does or doesn’t do rob you of your joy. Focus your energies on what is within your span of control. You’re doing super and you’ve proven that the choices she makes for her own direct selling business don’t have to affect you one iota. Keep on Keeping On.

See you at the top!