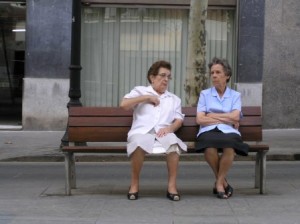 As is more common due to the internet, my entire team is long distance. I have met face to face with very few team members. I don’t have the ability to sit across the table to look each in the eye and determine who is blowing smoke up my skirt. I can only go by gut instinct and by listening carefully to what I am being told by each caller. It’s my role to remain impartial.

Our corporate compliance personnel will look into specifics if there is a policy violation. They are also the folks who have access to some data to support these claims. If neither party involved has any documentation to support any violation, but rather it’s merely a personality conflict, well, there’s no law against not liking members of your upline or downline.

Fortunately I have experience being a mother. I often have to pull out my Mom Hat when talking with consultants who are involved in the conflict. One general theme that comes up repeatedly is that you don’t have to like the people you work with, you just need to figure out a way to co-exist.

One possible way to co-exist is to work directly with someone else in the lineage. If the conflict is with the sponsor, then the consultant should be able to work with her sponsor’s sponsor. If for whatever reason that isn’t a viable solution, then perhaps someone else a little higher up in rank can be the go-to person if there are business questions.

Frequently while talking with one of the people involved, I hear: “If this doesn’t happen to her or of they allow that to go on “¦ then I’m quitting!” It’s unfortunate that one person has allowed the other to have so much power and influence over her business.

If you are involved in conflict and there appears to be no smoothing it over, just remember that you don’t have to like the people you work with. Sometimes the best answer is to agree to just ignore each other and go your separate ways.

What would you do if you were driving and came upon a road that was blocked? You’d likely take a detour, right? You’d take a different route to get to where you are going. If you can’t change the situation (change sponsors) then change your attitude about it and figure out a different route that you can take to continue on your journey.

If you quit, you’ve let the other person win. Remember, you don’t need to like everyone you work with.

About the Author: Laurie Ayers is a WAHM from Michigan and a Superstar Director with Scentsy Wickless Candles. She enjoys helping others start and maintain a candle business. You can find Laurie at https://la.Scentsy.us or https://www.ThrivingCandleBusiness.com