Men in Scentsy – The Man-Friendly Home Based Business

For more reasons why Scentsy is such a great company for men, click here to see additional informative messages from Waxwell Smart. He will share with you topics such as: Selling Scentsy using Social Networking, Sharing Scentsy with Strangers (the macho way), and How to Get Woman to Stop Nagging by Selling Scentsy.

It used to be that we typically thought of salesmen as just that – men. Most of the sales personnel for encyclopedias, vacuum cleaners, rain gutters, lawn service, alternative energy, carpeting, insurance, medical equipment, autos, car parts and other widgets were (and possibly still are) men.

Yet if you consider Direct Sales – home party plans and the like, a majority of those sales representatives are women. Sure, many direct sales companies have some male representatives and some are quite successful; but they’re still a minority. Direct sales is still viewed typically as a woman’s gig.

An estimated 15.6 million people are involved in direct selling in the United States and more than 92 million worldwide. Of those, nearly a third are men or two-person teams such as couples.

I can say with most certainty that the men who are currently successful with Scentsy were able to see past the gender stigma and see the bigger picture and the awesome potential. If direct sales companies are good investments for Warren Buffett and Donald Trump, it holds a great feature for any man.

Scentsy Wickless Candles Company is a prime example of a direct sales company for men. Here are three reasons why Scentsy is the perfect business opportunity for men, guys, dudes and fellas. BTW, there are many more options to sell Scentsy other than home parties – so don’t let that part of it scare you off!

1. Men are More Comfortable Buying a Gift from Another Man

Men are more comfortable buying a gift for wife, girlfriend, mom or sister from another man. Let’s face it; most men weren’t born with the “shopping gene.” As much as we women would love it if the men in our lives were as great of gift givers as we are, genetics simply doesn’t allow that to be the case a majority of the time.

Characteristically direct selling women sell to other women – this leaves out half of the population as potential customers. Male sales consultants can capture that market.

Also, there’s no law prohibiting men from enjoying candles. Many men do, just some are in the closet about it. Another man endorsing that their office, den, house or apartment can smell like Baked Apple Pie or even Leather and it’s nothing to be ashamed of, can be another great selling point to the untapped customer base.

There are worse things in life than being referred to as the Wax Man. There are plenty of women out there who like candles. There are also plenty out there who like home fragrances but due to allergies, asthma, small children or pets many no longer burn candles. You can solve their dilemma. Scentsy wickless candles are flameless, sootless, smokeless. The wax is melted with a 15- or 25-watt lightbulb. The women you come in contact with every day will be an easy sell.

I will never say that any product sells itself. That’s just not accurate. However Scentsy is an easy sell. Men, stop and think of all the women you encounter each day – if not at work, think of your wife, sister, girlfriend, mom and then all of their friends.

Do you do any social networking? Facebook? Twitter? LinkedIn? There is no shortage of potential customers. When women encounter a male candle consultant, the thought 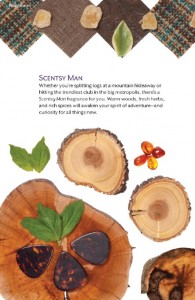 “There’s something to be said if he’s getting behind this company. I better check out what he has“ will enter their mind.

If you put two people in a room, both with Scentsy wax samples to hand out, one a man and one a woman, it’s almost guaranteed that the man will get more attention. I don’t need to get into the psychology behind it, but I can tell you that the Scentsy men in the company have a proven track record of success.

3. Scentsy is a Portable Business

Whether your job transfers you or need to move out of state to find employment, you can take Scentsy with you. Even if you’re not planning to move, you can take Scentsy with you every day as you drive to and from work. If your job keeps you on the road, what a better way to pass the time then to call people to tell them about Scentsy and then direct them to your website.

Men, if you’ve never seriously considered working with a direct sales company, I highly encourage you to give Scentsy a look. It’ll provide you the freedom to continue to work your regular job; or to give you something to do if you’re retired. Scentsy can fund the orthodontist, home repairs, college tuition, wedding expenses and aging parent(s) that may be staring you in the face. For more information about becoming a Wax Man, continue reviewing this site or contact me.

p.s. If you still think candle sales are a woman-thing. Get over it. You’re missing out on an awesome opportunity!