Need a Gift for Your Favorite Person who is a Pirate Fanatic? 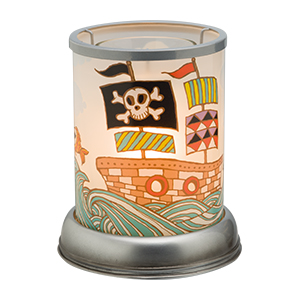 Swashbucklers take to the high seas aboard a playful glass warmer designed especially for kids’ rooms. When lit, it casts an enchanting glow, perfect for use as a bedroom nightlight and decorative display anywhere kids want a creative accent to call their own.

While this warmer is designed to be safer around children, it’s perfect for kids of all ages.

Our pirate candle warmer is limited supply, so at 20% off it won’t last long. It’ll be sold out when gone.

Remember to add some scented candles. Our wickless candle bars contain eight cubes each. Most people start with a ½ – 2 cubes.  Adjust according to personal preference.

See all our fragrant candle bars here. Use this special combine and save link to get one FREE when you buy five.

While you’re here, I thought you may appreciate some pirate jokes I found on short-funny dot com.